ppostnews.com: In Defence Housing Authority (DHA) Lahore, most active buyers are genuine buyers and their preference is also obvious i.e. property they can use for accommodation purposes. So naturally, they tend to pick phases and blocks where living right away or in the near future is possible.

Among genuine buyers, most are after houses and plots in DHA Phase V and VI. The trend is also reflected in Zameen.com’s search Trends, where Phase V and VI have been sharing the top slot as DHA Lahore’s most popular phases for houses during the last year. Compared with Phase V, property rates in Phase VI are cheaper, for both houses and residential plots. Genuine buyers also know this, which is why property agents registered with Zameen.com end up closing more deals for Phase VI.

If you are interested in seeing how DHA Lahore Phase V fared in terms of demand and fluctuation in property rates.

Back to Phase VI, Trends for DHA Lahore houses tells you about popularity of this phase:

In the last year, a constant yet subtle price appreciation can be seen in the data we have maintained for Phase VI. Except for the occasional bumps (overall performance), the rates have mostly been going up. But in order to know the correct pattern of rate fluctuation, we need to look at the performance of plots categorised according to their size.

Let’s have a closer look at the stats from Zameen Index for 5-marla, 10-marla and 1-kanal residential plots.

Before I walk you through how rates of 5-marla plots fared in the last one month, check this out; 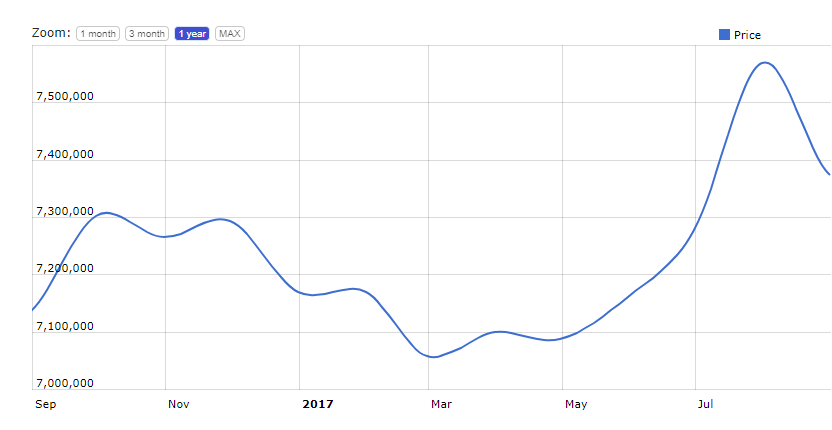 The graph shows that between September 2016 and March 2017 the rates went down. However, they started to go up from March onwards. After reaching the year’s highest rate of PKR 7.57 million in July, the rates of 5-marla residential plots dropped, although only marginally, in August. The rate, as of August 2017, rests at PKR 7.37 million.

The journey of 10-marla residential plots has rather been bumpy between September 2016 and August 2017. Have a look:

The rates have been going up and down more frequently, forming new peaks and trenches each month but the overall impact has been less startling when calculating the difference recorded over the last one year. The highest rate for these plots was registered in January this year at PKR 16.62 million.

Compared with 5- and 10-marla plots, performance of 1-kanal residential plots in this phase has been rather stable, with rates mostly going up.

Between September 2016 and August 2017, the rate of a 1-kanal plot increased from PKR 21.55 million from 22.92 million – a price appreciation of 6.37%. This appreciation shows that despite how investors behave or feel about the current market conditions, genuine demand does bring about an appreciation in rates.

Compared with Phase V, property rates in Phase VI are much cheaper. Check them out:

Based on these numbers, it is clear as to why the end users pick Phase VI instead of Phase V. I am also hoping that with the existing demand and the fact that construction of houses in Phase VI is on the rise, the difference is likely to reduce.

I hope you find the information useful. If you have any questions or feedback, you are welcome to let me know through your comments.

News is Copied by zameen.com

PAF Started Project In The Name Of War Heroes, But only 30 Unit were Allotted to Families

The DHA City juggernaut rolls on in the name of development

Lahore: 12 people, including women and children killed in a horrific fire at the factory