en.ppostnews.com : This society is one of the best performing projects launched by Zedem International in Rawalpindi. With a low investment volume recorded for almost all real estate developments across Pakistan, according to Zameen Market Report, maintaining the existing market rate and demand has lately become tough for many developers. The situation is slightly different for this project, primarily because Faisal Town attracts genuine buyers. Let’s explore more about this society.

It is located at Fateh Jang Road, near Motorway M-2 Islamabad Interchange, in the vicinity of the under-construction New Islamabad International Airport. Due to its location, and the fact that possession for its Block A is available, the society continues to serve genuine buyers.

The inauguration of the new airport and addition of a fine road network will make the neighbourhood even more attractive for both investors and genuine buyers. With the airport’s inauguration likely to take place in November this year, the time currently seems ripe for property owners to get returns on their investment.

All needed approvals and NOCs for the project have been awarded by the Rawalpindi Development Authority (RDA), as this society falls under its jurisdiction.  Despite the fact that the society doesn’t fall under the Capital Development Authority (CDA), property buyers don’t seem to mind it, NN Enterprises Muhammad Syed Khan told us.

Syed stated that the high development standards of the project are the reason genuine buyers aren’t bothered about it not being part of Islamabad.

Zedem International granted possession in Block A in 2016, and is currently busy conducting development work in Block B, Syed added. According to the facts shared by Syed, both Blocks A and B have well over 1,000 plots, which also means that despite having just two blocks, it isn’t a tiny society. Moreover, the society can be expanded further, but the developer is not actively engaged in doing so at the moment. Depending on how and when the developer plans it, Faisal Town can be expanded to Block C, he said.

In Block A, about 20 houses are already under construction, while many more property owners are looking to begin. With connections for basic utilities available, Block A is close to greeting its first residents soon. In addition to that, some private developers are also looking to launch their villa project in Faisal Town’s Block A, said Syed.

The pace of development work in Block B isn’t fast. We have also learnt from Syed that owners of open files, which were issued on a payment plan back in 2015, are not bound to pay the due instalments. The developer seems lenient about it as he is known to facilitate investors, according to Syed. However, for getting possession, the owners are required to clear their pending dues.

In the case of Block A, the developer has imposed a 100% fine on plot owners whose payments are due, he further said. So owners of Block B’s open files should keep that in mind and keep the cash ready for when the possession is granted. Following the payment plan could make things easier.

In case you are a new buyer looking to purchase these open files, you should know that there is premium on them. First have a look at the payment plan: 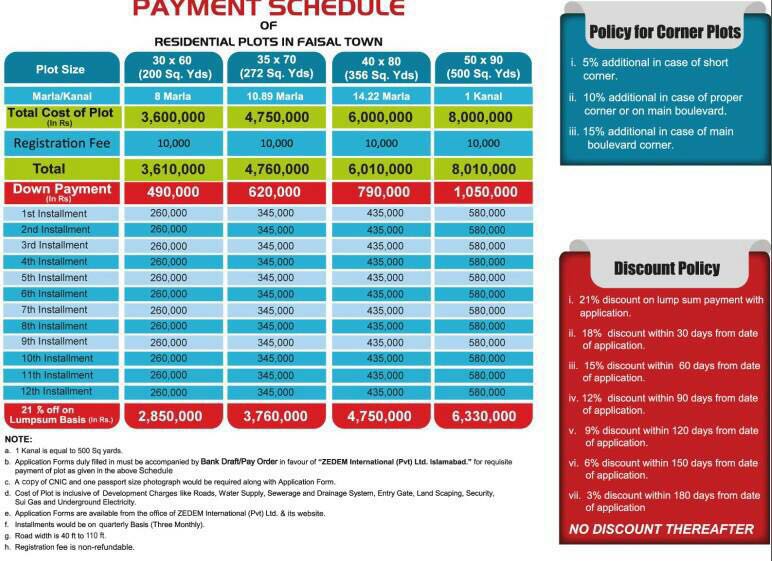 A look at the price range

If you have any questions or feedback regarding this article, please feel free to leave a comment below.

SBCA Released the List of Illegal Building in Karachi