He did not mince any words when laying bare before the media his fears about how the construction of the new city on Dingi and Bundal islands on Karachi’s coast would affect the region as well as deprive thousands of local fishermen of their means of income.

He was speaking at a press conference regarding the issue at the Karachi Press Club on Tuesday. It was organised by the PFF, Pakistan Institute of Labor Education and Research (PILER) and several representatives of civil society. 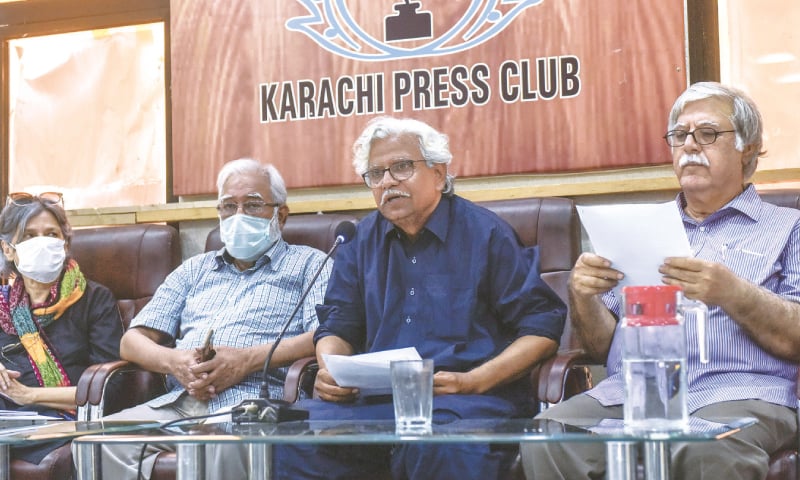 Criticizing the federal government’s proposal to create a Pakistan Islands Development Authority for the development of the two islands, Mr Shah said that there were around 300 big and small islands along Sindh’s coastal belt which were created over the years from silt from the River Indus.

He said that the creek areas leading to the sea around these islands were used by fishing boats and after the creation of the new city the poor fishermen would need to look for alternative routes.

“This is not development. It is destruction,” he said.

He also discussed Pakistan’s 1,050-kilometre-long coastal belt where he feared all the islands would be taken into control by the federal government.

Mr Shah said that the Musharraf government had twice attempted, in 2000 and 2006, to develop the twin islands but the project failed due to various reasons. Later, in 2013, the PPP government had also tried to develop the islands through Malik Riaz but the Supreme Court put a ban on the construction.

“Moreover, besides the twin islands, a city called Waterfront Sugarland City, comprising an area of over 60,000 acres was also planned at Hawkesbay. The project with an estimated cost of Rs68 billion was also mentioned on the then city district government’s website,” he provided.

“The federal government has decided to construct the city on the twin islands without any consultation with the Sindh government, but the area falls under the provincial jurisdiction. The federal government’s action is not only against the Constitution of Pakistan, it is also against international agreements and conventions in place to provide social, economic and cultural sovereignty to the indigenous people. Dingi and Bundal are in fact Sindh’s islands. They are the property of the people of Sindh where the fishermen have traditional rights over them while the provincial government is the custodian of the land and forests,” the PFF chief pointed out.

He added that the islands also happen to be bordered by thousands of hectares of mangrove forests.

“These forests are fish and shrimp nurseries while these creeks from Karachi to Thatta serve as fishing grounds for the fishermen,” he said.

PILER’s Karamat Ali said that there should be a public hearing regarding the matter to at least hear out the stakeholders.

“Here you are not even able to manage your city and you want to build a new one?” He pointed out. “You cannot manage your solid waste. Besides the coming up of a new city will lead to environmental degradation and then there will be a chain reaction of further destruction. Out here some four million acres of land in Badin and Thatta are already under water due to inland sea movement,” he added.

“Do you think your unscrupulous builders are even capable of building a new city? Do not burden Karachi any further,” he said.

Aurat Foundation director Mahnaz Rahman also said that Karachi was already in a mess with constructions on amenity plots and china-cutting. “We don’t need any more mess thanks to more greed,” she said.

Asad Iqbal Butt of the Human Rights Commission of Pakistan said that already marine life around Karachi was under stress. “We are diverting all untreated and industrial waste to our sea which is having very diverse affects on our marine life. The new city will add to it,” he said.

Senior trade unionists Habibuddin Junaidi said that the move was a direct attack on the labour force. “Fishermen, too, are a part of our labour force,” he said.

Saeed Baloch, PFF’s general secretary, pointed out that if the fishermen can no longer use the creeks to get to the sea and have to look for alternative routes, it will lead to a rise in their fuel needs, which in turn will make fish more expensive.